SAAS affiliate programs can be quite lucrative if you know how to promote them to your audience and you have the right people checking out your site or your social media page.

If you’ve been trying to find a new affiliate program to join and you’re having a little trouble separating the wheat from the chaff, we’re here to give you a hand. We put together a detailed review of the Duda affiliate program where we go into everything you should know — from how much you can earn to how easy it is to track your performance. Read on to find out more!

This is perhaps the first question that you need to ask even before considering whether you should join the program or not. To make things easy for you, we’ll tell you that Duda can be seen as a professional website builder.

However, it has many more features than you would expect and it is among the top rated brands in the industry. Lots of well-known companies work with Duda right now because the core product is extremely easy to use.

Needless to say, it makes a very good choice for rookie bloggers and even people looking to set up small businesses such as ecommerce websites.

What can you promote to your audience?

We already hinted at the fact that the website builder per se is not the only strong selling point when it comes to Duda. Anyone can rely on this platform for anything ranging from team collaboration and client billing to ecommerce, memberships, and client management.

It’s one of the most complex platforms that we have come across in this sense because it doesn’t just work like alternatives such as Wix or Squarespace. They might be handy and easy to use, too, but this one’s packed with features for actual professionals.

In terms of plans, there are quite a bit of options. There’s a Basic one that’s billed at just $14 per month, but as you can probably imagine, there are a lot of limitations to it. In fact, for this amount of money, you get just email support and one site, as well as AWS hosting.

The next plan is called Team and is billed at $22 per month. It basically has the two previously mentioned features that can be found in the Basic, but there are a few extra ones, too, such as the ability to collaborate with up to four members, the ability to bill clients, and manage them, too.

According to the brand itself, the best value is the Agency plan, which costs $44 per month. This one makes it possible for users to manage up to four different websites complete with hosting. Besides the features already included in the Team plan, the Agency one includes a widget builder, site export, as well as dynamic pages.

Finally, there’s a White Label plan that costs $74 per month. As you can expect, this one is among the richest plans out there and comes with all of the features of the previously described ones, along with very nifty additions such as branded client communication, a custom platform domain, and more.

And if you are lucky enough to have a B2B audience instead of a B2C one, we’ll mention that there’s always the option of your referrals getting a custom plan. Of course, the cost of this one is not disclosed but it does include some very attractive features, such as a simple editor, onboard and account management, unlimited access to both your team and your clients, as well as integration with a variety of external datasets.

How to join the Duda affiliate program

First of all, both the web and the mobile versions have affiliate programs, so that’s one less thing you should be worried about.

But one of the best things when it comes to being a Duda affiliate is the fact that you are not forced to join it through the company’s own website. We’ve written about many affiliate programs in the past and we have to admit that one of the most frustrating things about some of them is that they are self-managed.

That’s not the case when it comes to Duda. Even if you have a dozen niche websites, for example, you will be able to manage everything pretty much on any affiliate network you prefer. Consequently, you can find the program on platforms such as FlexOffers, ShareASale, Impact Radius, and SAAS affiliates.

You can also use Duda to set up your own affiliate program, if that’s something that you might be interested in — the sky’s the limit when it comes to what you can do with this service.

But depending on whatever network you tend to prefer, you will have to abide by two sets of rules — the one put in place by the affiliate platform and the Duda brand itself. Make sure you read the fine print so that you don’t go against anything — this will make it possible for you to earn money with this opportunity for as long as possible.

How much can you earn as a Duda affiliate?

We know that this is what you have been waiting for and that the rate is perhaps the most important aspect to consider when joining a new program. The problem is that the company isn’t exactly transparent when it comes to how much you can make.

According to their own site, you can earn as much as $300 per conversion depending on the value of the sale. But you should expect this commission rate to be as high for the White Label and Custom plans, not anything under them.

The base commission can effectively range between 50% and 200%, but it truly depends on the value. The nice thing is that you will be paid that share out of the whole value for the entire year — because that’s how people are billed when purchasing a Duda plan.

The cookie length is 30 days and while that could have been a bit better, we really can’t complain about it given that this is pretty much the industry standard at this point. Plus, there are always worse options (we’re looking at you, Amazon Associates!).

So, based on all of this information, being a Duda affiliate does indeed seem like a pretty lucrative thing.

When it comes to the payment methods, the good thing is that you really do not have to worry about anything. Because Duda works with so many other affiliate networks, you can just choose the one you like and be paid through the method you prefer on there.

That means that you can get your earnings through anything ranging from PayPal to ACH, bank wire, or anything else.

As for the limits, we did find some conflicting information on this. The brand says that you have to make just $10 in order to be eligible for payment processing, but other resources that we have gone through for this article note that the limit is $50.

We will say that the threshold largely depends on the affiliate network. So, if you want to be able to withdraw your money even if you’re not making a fortune with Duda, you should take the time to analyze all of the platforms and base your decision on which one to use depending on that.

Pros and cons to being a Duda affiliate

As you can expect, there are both advantages and disadvantages that need to be considered before you finally decide whether it makes sense for you to become a Duda affiliate or not.

But when it comes to this specific program, we’d say that the pros definitely outweigh the cons. The commission, the cookie length, along with the many payment methods and the low payment threshold — are all benefits that you need to take into account.

The only thing that we would have really liked to see in this sense is complete transparency as to how much affiliate marketers can actually make. Unfortunately, the brand’s own website isn’t super clear on that and while we do get that the rates are high and can sometimes even exceed the value of the purchase made by your referrals, we would have still appreciated to see something clearly written.

If for whatever reason you feel like Duda just doesn’t seem to be a good fit for you and your affiliate marketing journey, just take a look at some of the following options.

We’ve written about the Wix affiliate program before and we will say that it is among the best-known brands in the industry when it comes to website builders. It’s a pretty decent option if you want to be able to make some quick money, especially since the company pays as much as $100 for every purchase made through your affiliate links.

The biggest downside when it comes to being a Wix affiliate is that you need to make sure that you make at least $300 in commissions per month so as to be able to continue using the program and also withdraw your money.

So, unless you are getting a massive amount of traffic and are absolutely sure you can meet this requirement, being a Wix affiliate might not make sense for you.

This one is not as lucrative as some of the other programs we’re mentioning here, but it’s a solid product and lots of people have used it before. For that reason alone, you might have less of a hard time recommending it to your audience when comparing it to other brands.

Clickfunnels pays you 20% on all of the subscriptions paid for through your affiliate link. The value of the rate can obviously depend on the value of the plans, but for the $297 one for example, your earnings will be $59.4.

There are lots of extra ways to earn though, and you can also increase your rate if your performance is truly stellar.

While the rate of the HubSpot affiliate program seems lower compared to what we’ve seen in other choices, the fact is that the money you can make through this opportunity really isn’t too little at all. 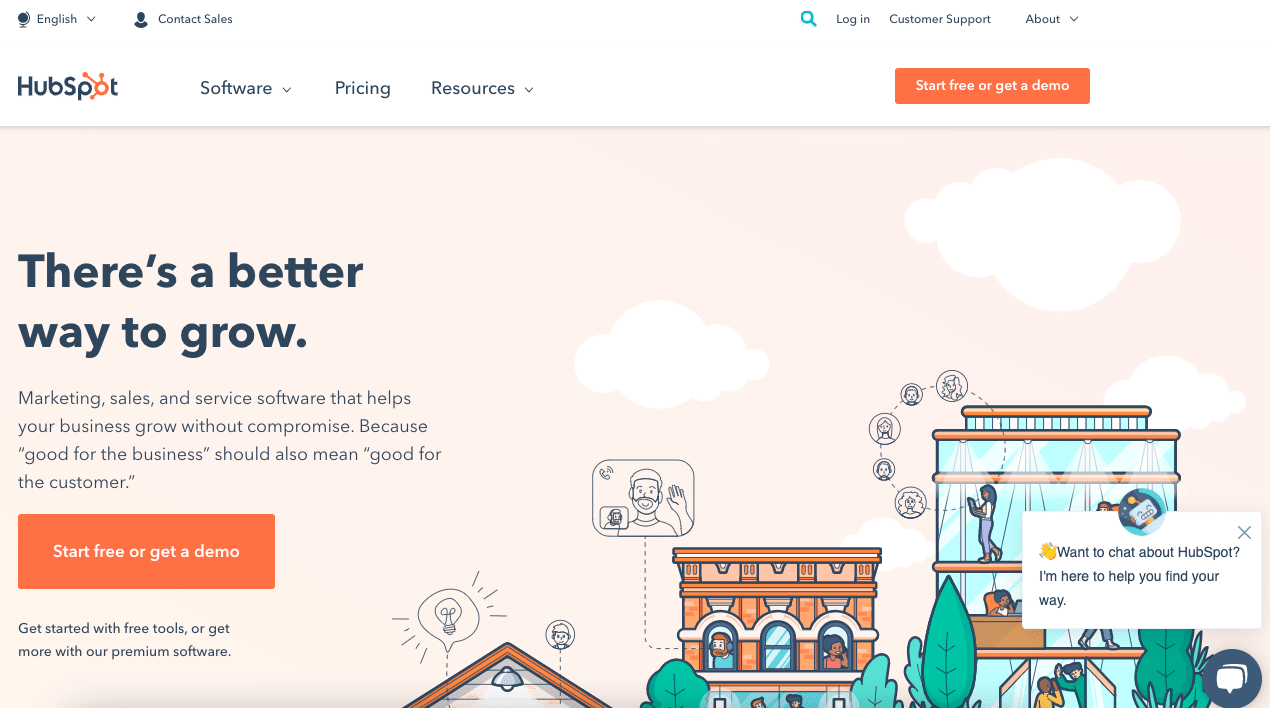 HubSpot is a very complex platform that can be used for many tasks, so their plans tend to be quite expensive. And while it is very well-known and effective, the downside to the fact that it’s so costly is that not a lot of people have the budget to try it.

As an affiliate, you can make 15% of whatever your audience chooses to pay for the plans.

This one is a little complicated because like Duda, the company isn’t too straightforward when it comes to the commission rate. By all accounts, you’re supposed to make up to $200 every time one of your referrals makes a purchase, but that remains a guesstimation until it is confirmed by the company’s own website.

The cookie lasts for 45 days, though, so at least it is longer when compared to what other companies have to offer.

With Weebly, you can expect to be paid a fixed 30% rate on all of the plans purchased through your affiliate link. Whether that is something decent or not — it’s only up to you to decide.

But the best thing when it comes to the Weebly affiliate program is the 120-day cookie duration. You’re not going to come across this with many other programs, so you basically have four months at your disposal to make a sale.

Need help with your SEO or digital marketing efforts? We have lots of plans and courses available. Get in touch to find out how we can be of assistance!